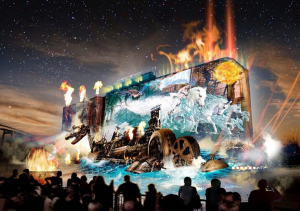 Throughout its history, the city of Buffalo, New York has been closely associated with its grain elevators. The elevators were invented in the 1840s and have come to symbolize the city’s economic ups and downs.

Buffalo officials recently announced a new plan to use several historic grain elevators as part of a large public art exhibition. The grain elevators, which have been unused for years, will be part of a light show featuring 3D video projection, fire, and pyrotechnics.

The plan is the work of the Erie Canal Harbor Development Corp., which oversees development of Buffalo’s waterfront area. They have hired Ambiances Design Production to do the lighting for the project.

Ambiances earned praise for a similar project they did in Quebec City. That project was originally intended to be a one-time show, but it was so successful that it turned into an annual tradition. Ambiances’ work is unique because of its narrative storytelling.

The project is seen as a way to tell the story of the city of Buffalo. City leaders hope that the light show will draw people to the redeveloped Outer Harbor and Silo City areas. They expect the show to attract tourists who visit Niagara Falls.

The first phase of the project will light up two grain elevators near the waterfront, the underside of the Skyway, and the Michigan and Ohio Street bridges. In the second phase, 14 grain elevators will be illuminated. That phase will also include fire, pyrotechnics, and 3D video projection on the side of the Connecting Terminal grain elevator at the edge of the Buffalo Harbor, which was recently revitalized.