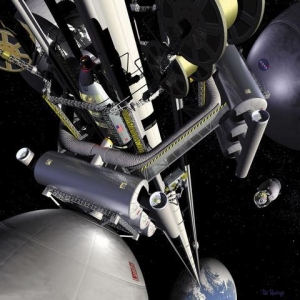 Scientists have been trying for years to develop the technology required to build an elevator to space. They would like to build a tower that is anchored to the Earth and stretches beyond geosynchronous orbit. The tower would be held under tension by natural forces. Robotic climbers would be able to transport people and equipment up and down the tower for a fraction of the cost of current space missions. It would no longer be necessary to build rockets and expend large amounts of fuel.

Rocket launches using current technology can cost over $400 million. Moving payloads into low-earth orbit can cost up to $10,000 per pound. Scientists are unsure how much it would cost to build a space elevator, but it would probably be much less.

NASA has been working on developing a space elevator for several years. In 2009, it awarded LaserMotive $900,000 for demonstrating a way to power a space elevator with lasers. It is also offering $2 million in its “Strong Tether Challenge” to the first company that can produce a cable with 5 gigapascals of strength.

Lockheed Martin is interested in using the new technology in its Perforene water filtration system. However, it could also potentially be used to construct a space elevator cable. Scientists have previously concluded that a cable would need a tensile strength of about 130 gigapascals, and Lockheed Martin’s carbon macrotubes would be strong enough.

There is still a long way to go before a space elevator becomes a reality. Even if the technology would work in theory, producing a 60,000-mile-long cable would take years. Experts estimate that a working space elevator is about 50 years away.