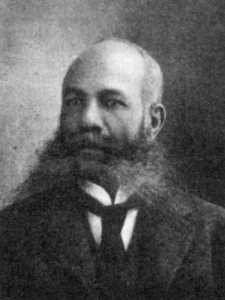 Miles invented shaft doors that opened and closed automatically along with the elevator doors. Before his invention, an elevator conductor had to manually pull the doors closed. If the conductor forgot to do that, or if there was no conductor, the shaft was exposed, creating a safety hazard for passengers in the elevator and people on other floors.

If the shaft door was not closed, it would sometimes lead to accidents with people falling down an elevator shaft when they expected to step into the elevator. Miles’ invention dramatically improved safety by protecting passengers from the elevator shaft.

Miles attached a flexible belt to the elevator cage. When the belt came in contact with drums just above and below the floors along the elevator shaft, the elevator shaft doors opened at appropriate times. The doors were automated with a series of levers and rollers.

Miles met and married his wife in the early 1870s. The couple had a daughter and moved to Duluth, Minnesota. It is said that while he was riding in an elevator with his daughter he recognized the dangers in the design and then came up with the idea for automatic doors.

Miles also worked as a barber and invested in real estate in Duluth. He was once the wealthiest man in the Northwest. In 2007, he was inducted into the National Inventors Hall of Fame.